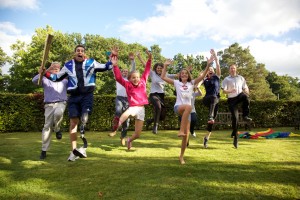 Blessed with a perfect Indian summer day over 100 patients, family and friends enjoyed meeting Paralympians Stef Reid and Scott Moorhouse, chatting in the sunshine, visiting the clinic facilities and sharing English Afternoon Tea. ProActive Prosthetics hosted the open day in celebration of 2012! For our clinic 2012 has been packed with exceptionally proud moments.

In April this year at 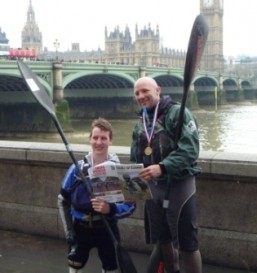 Westminster Bridge,  Jon White and Lee Waters crossed the finish line of one of the toughest canoe races in the world, 28 hours and 9 minutes after they started in Devizes, Somerset. Jon, who is a triple amputee and Lee, who suffered multiple gun shot wounds, competed among able bodied canoeists, one third of whom retired from this challenging race. It is to their credit that Jon and Lee had trained hard and were well prepared for this race. Even in the unfavourable conditions for fast times, they managed to finish the race in under their target time. Richard Nieveen, a passionate canoeist himself, followed some of the race by bike and was there at the emotional finishline. Guests enjoyed a short presentation from Richard which included candid video clips from the river bank and the finish at Westminster.

In June Pollyanna and her family went to support Sarah (Pollyanna’s mother) who took part in the first ever half marathon in Sierra Leone. Pollyanna, along with her brother Barnaby, sister Sapphire, and their father Christopher, ran a charity 5 kilometre race in Sierra Leone. Pollyanna, running with her prosthetic leg and crutches, did not stop for a single second along the way – determined to send a message of inspiration to other less fortunate amputee children in Sierra Leone. She has shown them that, with the right support, their lives needn’t be determined by their disabilities. Returning to London, Pollyanna, her mother and her aunt were part of a team that carried the London 2012 Paralympic torch. A video about the fantastic charity the Hope family have set up to provide prosthetic limbs to poor countries was shown. ‘I think I have had a busy year’ Richard Nieveen reflected, ‘but when I look at all that this family have achieved this year, I feel like mine was a walk in the park’.

Then came the London 2012 Paralympic Games. ProActive Prosthetics supported 2 athletes in their preparation to compete in the Paralympics.

Scott Moorhouse, who reached the finals of the mens F42 Javelin, gave a talk about his journey from being selected at a talent ID event to competing in the Paralympic stadium. ‘People ask me what it was like competing in front of the huge crowds’ recalled Scott ‘but I can’t really remember it! It all happened so quickly!’. He was also nominated to carry the London 2012 Olympic torch. After his talk, Scott spent time talking with patients and their families and having photos taken with his torch and Javelin. 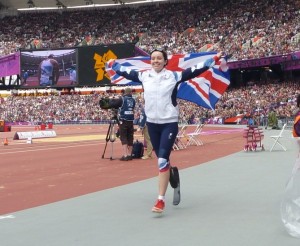 Stef Reid talked about her 3 events in the Paralympic stadium. Stef won the silver medal in the women’s F42/44 long jump. ‘One of my favourite moments’  Stef recalled ‘was when I left the [long jump] pit after winning silver my reaction was just disappointment but as I walked back to get my stuff Richard was there with his family and I was so unbelievably grateful that he was there. He called me over and gave me a flag and said “Stef, don’t you dare leave the stadium without marching up and down proudly.” It ended up being one of the most special moments of my life – I spent half an hour out there saying ‘hi’  to everybody and signing things for the kids ‘. Later Stef posed with her medal and took time to talk to patients and their families.

Just when we though we had had enough excitement for the year we received a youtube link from Sue, a relatively recent amputee. Sue overcame all her fears to do a sky-dive in aid of Blesma.

We also heard about Chris summiting Italy’s Grand Paradiso (1335ft) in a total of 15 hours (up and down) and Paul, now a double amputee, performing aerial acrobatics in the Paralympic Opening Ceremony.

At Westminster Bridge, on Easter Sunday (April 7th 2012), Jon White and Lee Waters crossed the finish line of one of the toughest canoe races in the world, 28 hours and 9 minutes after they started in Devizes, Somerset. 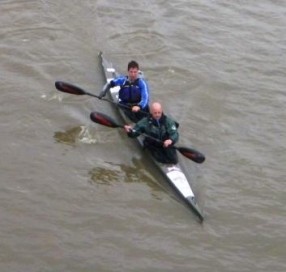 The Devizes to Westminster (DW) is a non-stop canoe race that covers 125 miles of the Kennet and Avon Canal and the River Thames, including 77 portages (where the canoe is carried around locks or very low bridges). Jon, who is a triple amputee and Lee, who suffered multiple gun shot wounds, competed amoung able bodied canoeists, one third of whom retired from this challenging race. It is to their credit that Jon and Lee had trained hard and were well prepared for this race. Even in the unfavourable conditions for fast times, they managed to finish the race in under their target time.

Jon and Lee who were both injured while serving in Afghanistan, competed in the race to raise money for The Royal Marines Association and SSAFA Forces Help. Donations to these great causes have been flooding in (follow the links to the just-giving pages if you would like to make a contribution). 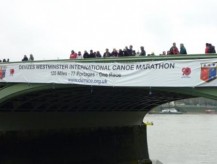 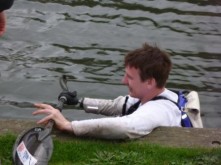