In 2011 ProActive Prosthetics were the first clinic to fit the Genium knee and have since been acknowledged as the most experienced clinic in the private sector.

ProActive now lead the way with the new X3 Knee. 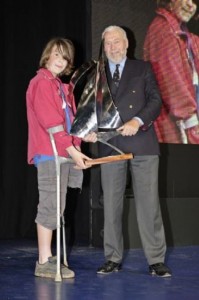 The patient Laurence suffered a traumatic amputation in a boating incident at the age of 11, the accident did not stop Laurence’s passion for sports and sailing and at the age of 14 Laurence was awarded the “Raymarine Young Sailor of the Year” one of the most prestigious trophies in the sailing world.

ProActive again will lead the way fitting Laurence with X3 knee, the prosthesis will function as an everyday activity limb but in being water proof and also allowing Laurence to run will effectively provide three prosthesis in one.

Note: The picture  shows Laurence receiving the Raymarine Young Sailor of the Year award from Sir Robin Knox-Johnston at the London Boat show in January 2008.

For more information about the Genium X3 please call 01252 702500 or email clinic@proactiveprosthetics.co.uk. 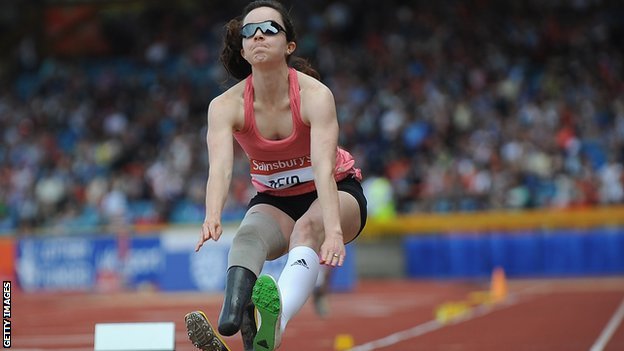 Paralympic long jump silver medallist Stef Reid hopes her new world best can be the catalyst to a successful 2014 season.

“I knew I could do it and I celebrated,” Reid told BBC Sport.

“But at the same time, this isn’t the end goal – there is still a lot more work I need to do.”

Stef, who was born in New Zealand to British parents and represented Canada at the 2008 Beijing Paralympics before declaring for Great Britain in 2010, had her right leg amputated below the knee following a boating accident when she was 16.

But after winning silver in the combined F42/44 category at the Olympic Stadium with a personal best of 5.28m, Reid had a nightmare last year, culminating in finishing last in her event at the IPC Athletics World Championships in Lyon. She believes she has turned the corner, however, with the help of coach Rana Reider.

“I knew I needed to change things after the Paralympics and I finally got sorted out by last May and had started working with Rana,” she explained.

“At the back of your mind you hope things will work out from the beginning but it takes time when you go to a new coach and I didn’t realise how bad things were going to get.

“I will never forget how terrible Lyon was and I never want to feel that again. It was so below what I was capable of doing, but meeting Rana has given me the tools to work with and it feels great.

“I’ve had to put my trust in Rana and his coaching methods but also had to be patient, which is tough for me because I’m incredibly impatient. But training has been going really well and I feel really strong and confident when I step out.”

Having not jumped over five metres in any competition last year, Reid jumped 5.16 at an event in Gainesville, Florida before her world record leap and for good measure she also ran a personal best of 13.80secs in the 100m.

She still harbours hopes of getting the 6.20m able-bodied qualifying standard for the Scotland Commonwealth Games team but admits that may be beyond her before the 10 June deadline.

Next up are the IPC Grand Prix meetings in Arizona, USA on 10 May and Nottwill, Switzerland on 18 May, as well the Diamond League meeting in Glasgow on 11 July.

However, her main focus for the year is the European Championships in Swansea from 18-23 August where she will face Lyon gold and silver medallists Iris Pruysen of the Netherlands and Frenchwoman Marie-Amelie Le Fur.

“I’m really lucky to have strong Euro rivals so the Europeans will be a big competition for me,” she said.

“As British athletes, we are so lucky to get some great opportunities to compete in front of a home crowd and I think this is the best country in the world to be a Paralympic athlete.

“I’m giving myself the best opportunities I can to get the Commonwealth Games distance and I think I will eventually do it but I don’t have too many competitions left.

“I like to make tough goals and I will keep going with that target in mind.”

On 25th April 2014 ProActive Prosthetics hosted their 5th seminar in a series of educational programmes for professionals involved in the rehabilitation of amputees. Nearly 50 Personal Injury lawyers and case managers joined a variety of speakers and patients to learn about the various aspects of rehabilitation. The day started with a talk by Richard Nieveen (prosthetist) on the principles of prosthetic fitting followed by a talk on new generation myo-electric devices by Kevin Shaw (prosthetist). Mr Norbet Kang (plastic surgeon) gave an excellent presentation on his experience with nerve repair and the potential for future prosthetic rehabilitation of amputees with advanced technology myo-electric devices. Dr Imad Sedki (rehabilitation consultant) spoke about the rehabilitation of amputees and Mr Scott Hodder (case manager) gave an insight to the role of a case manager in prosthetic rehabilitation. Lunch was followed by a practical demonstration of gait re-education in a trans-femoral amputee. Reconstructive amputation and the role of revision surgery was the subject of Mr Mike Saleh (orthopaedic surgeon) and Mr William Latimer-Sayer rounded up the day with a barrister’s perspective on medico-legal claims for amputees. A panel of speakers fielded questions and reflected on aspects of rehabilitation presented during the day.
The course was accredited by APIL Training and participants were credited with 6 CPD points.
“A fantastic day!” quoted one participant “nice to have a strong clinical focus – very interesting”
“Excellent and stimulating” said another and “Excellent day – fantastic speakers with great insight into the future…..each talk was engaging” from another participant “a good opportunity to see how the clinic works and meet the ProActive Team.”
ProActive Prosthetics plan to hold similar seminars in the future. If you would be interested in attending please contact us at:
clinic@proactiveprosthetics.co.uk
tel: 01252 702500

On Saturday 1st of February 2014 ProActive Prosthetics hosted their first Ladies Day. The day was conceived as the team at ProActive Prosthetics observed many of their lady patients who enjoyed chance meetings in the clinic reception area. A day was arranged for their lady patients to have the opportunity to meet each other in a more relaxed way and have some interesting topics to discuss.

The day started with a thought provoking film called ‘Fitting Room Friends’ made by a team of amputee ladies from the Royal National Orthopedic Limb fitting Centre at Stanmore. The film followed a group of lady amputees who met and became friends at the limb fitting centre. It was both poignant and fun covering everything from what to wear to cosmeses and dance classes. The film, along with its many issues was discussed between the ladies.

Jane Hunter, Prosthetist and Orthotist at ProActive Prosthetics talked about some of the prosthetic issues particular to women amputees. Statistically, there are 3 times as many male amputees as females. In the Boston marathon bombing in April 2013 8 out of the 16 victims were women. Some new treatment factors emerged from the treatment including the need for more privacy, modesty and a sense of dignity in the evaluation process and a preference for a female prosthetist. Jane also talked about topics such as the best type of nail varnish to use on prosthetic limbs.

After a lunch during which the ladies had plenty of time to get to know each other a little better Stef Reid, Paralympic Silver medallist spoke about her experience of being a lady amputee. Stef became an amputee following a boating accident when she was 16 years old. She talked very openly about the effect it had one her at the time and how she was quite shocked about how big her prosthesis needed to be considering she had only lost her foot. She spoke about the clothes she wore then to conceal her loss and said that many of her new acquaintances had no idea that she wore a prosthesis. These days, of course, she has no desire to hide her prostheses, in fact she has recently been modelling designer clothes for Debenhams in her running blade. Stef then confronted the subject of relationships. She confided that the less concerned she became about her disability the more dates she was asked on. She is married to a paraplegic and admits that she found his complete comfort with his own disability made him more attractive to her.

ProActive Prosthetics Physiotherapist, Pam Barsby, led a discussion about balance and fear of falling and dealing with different environments such as ice and snow, rough ground, escalators and steps. The ladies enjoyed Pam’s practical approach to everyday difficulties.

The day came to a close with ladies swapping contact details having agreed that they would all like to meet again sometime soon. Among the many thank you letters received one lady wrote ‘I feel sure that we all took away some helpful nuggets which will shine at appropriate opportunities.’ Another wrote ‘You are providing a special place for people to be enabled to regain physical independence and to recover mentally and emotionally to live life to the full’. And another wrote ‘For the first time since my accident I felt part of a group of people who understand what Ii was going through.’

ProActive Prosthetics would like to thank the speakers Nicola Lane, Stef Reid Jane Hunter and Pam Barsby for making such an interesting day and to the lovely ladies who came for the day. Thanks also go to Elemis who supported our event by providing a beautiful bag full of goodies for each of our lady guests. ProActive Prosthetics will be arranging another ladies day in the Autumn this year. 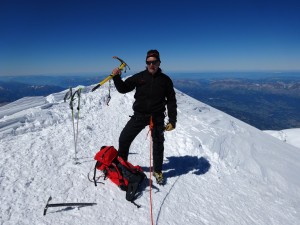 Just back from the Alps and ‘a little beaten up’ but the good news is that last Wednesday at 11.15 Chris Head (below knee amputee) and Steve Monks made the top of Mont Blanc via the Gouter route without serious difficulty in around ten and a half hours climbing from the Nid D’Aigle. Beautiful conditions with fresh snow from 200 to 400mm making it pristine after the storm the previous day. Perhaps a tad windy and very cold early on.

Chris thanked the team at ProActive Prosthetics for their commitment and hard work in making it possible. 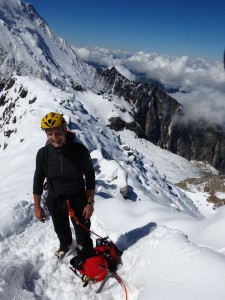 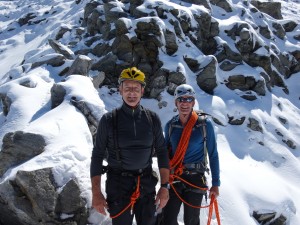 Following a number of enquiries  about running and running blades after the London 2012 Paralympic Games, ProActive Prosthetics are to host a running clinic on Friday 31st May 2013.

The day will start at our clinic in Elstead, Surrey with a short seminar about the various aspects of running with a prosthetic limb. Our prosthetists Richard Nieveen and Kevin Shaw will be there, along with Stef Reid, Paralympic silver medalist and a running coach.

Following a light but energy giving lunch, participants will be taken to Charterhouse Club athletics track for some practical experience and advice from the prosthetists, Paralympic athlete and running coach.

All ProActive Prosthetics’ patients are welcome to join the day – there are no requirements other than an interest in learning to run or to improve your running technique.

If you are interested in learning more about the day please call the clinic on 01252 702500 or email clinic@proactiveprosthetics.co.uk