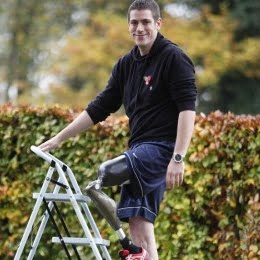 I lost my left leg above the knee in a motorcycle accident aged 15, and following almost a year of in-patient care through the NHS, I was referred to Richard Nieveen for supply of a new prosthetic leg. I was in a somewhat difficult situation as he shattered his right ankle very nearly beyond repair, and suffered multiple fractures to his right leg.

Over the past twenty years I have received my prosthetic care from Richard Nieveen, and about 10 years ago became the first patient to wear the ground-breaking new prosthetic system Genium.

When I first met Richard, I knew almost nothing about the world of prosthetic medicine, but very quickly trusted Richard completely, and realised instantaneously that I had found someone who would become integral to my life! From the word go Richard was focussed not only on my missing leg as you might expect, but also on building me a new one which would elongate the life of my remaining right leg & ankle. All these years on, I don’t want to say the ankle is 100% trouble free, but know for certain that without Richard’s intervention early on things would be significantly harder for me.

I was fitted with a new socket and new leg back in 1998 and at the time friends and family remarked on the vast improvement I enjoyed almost overnight, almost immediately I was able to return to work, and secured a job working in the lighting department of a theatre in London’s West End. I have since branched out into other industries and now run several successful businesses, attributing my ability to continue to work and travel as much as I do to the care I receive from ProActive Prosthetics.

I am very fortunate and don’t have to attend many medical appointments nowadays, although now, and throughout the whole time, visiting Richard has never been something which has caused me a problem, or which I have been nervous about like some of the others, and in actual fact something I rather enjoy.

The technology available is amazing, and to be able to have become involved with the very early stages of such a new and exciting product is a real privilege, and while there has been much written about this technology, all amputees will know and understand the socket fit is as much, if not a bigger part, of the leg as a whole – and the thing that can stop you in your tracks. I’ve been so lucky over the years not to have really suffered from any of those problems, and on the odd occasion when I have Richard, has gone out of his way to see me at short notice, and always sorted the problem first time!