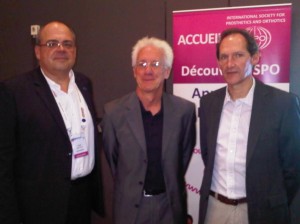 Richard Nieveen was invited to an international meeting in Marseille France last week, to present a prosthetic paper.  The session titled “Projet de Vie” was a two hour session with speakers from many other countries.

The emphasis of Mr Nieveen’s presentation was to reinforce the importance of the patient/prosthetist relationship and that fundamental to any prosthesis is socket comfort.