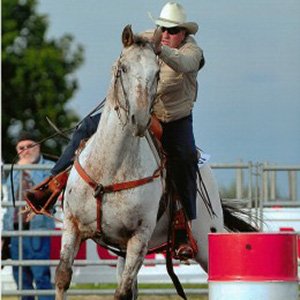 Mick, a keen horseman lost both his legs below the knee in a work related accident, whilst working as a train shunter on the railway.    Prior to the accident Mick was a regular polocross player taking part in matches for his club, the Western Phoenix Polocrosse Club, based in Great Canfield. Mick said: “As soon as I was out of the theatre I asked the doctors if they thought I would ever be able to ride again. They were positive and told me I could do whatever I wanted to, but that it was going to take a lot of hard work, from that point on I was determined to get back on my horse.”

Within 9 days of being fitted with his first prosthetic legs Mick was back in the saddle!

Mick said: “It felt wonderful to be there”. In less than a year, with the support of his wife Sue and the help of his Prosthetist, Richard, Mick was back taking part in Rodeo Competitions; a Western style gymkhana. The first one was in April 2008.  These competitions involve taking part in different games, such as reigning (western dressage).
Mick was also taking part in tournament Polocrosse matches, the first one at the Ashfields Carriage and Polo Club, in Great Canfield in the Summer 2008.  Mick said: “ I was so pleased I could do it. I was playing alongside my friends from the club and I was just so excited to get back into the saddle again, it was really important to me to prove I could still do it’.  Mick is now riding regularly two or three times a week.

Mick started attending the ProActive Prosthetics clinic in January 2008 and states that, “ Richard was prepared to listen to what I wanted to achieve, involve me in the process of choosing which products I would need to achieve my goals, he was positive and optimistic while being honest and realistic about what was possible. Richard made me feel like I was part of the team and that we were all working towards the same goal, helping me realise my dreams.”

I’ve recently been White Water Rafting with BLESMA and next I am off Ski-Bobbing in February.