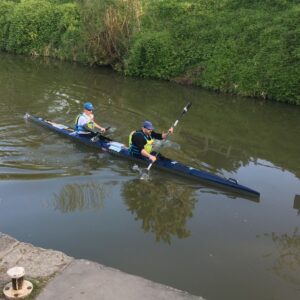 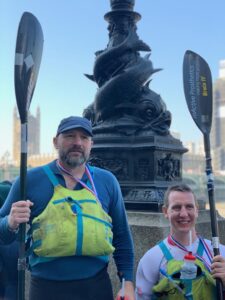 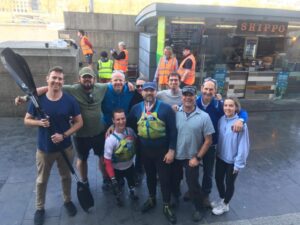 Jon and Lee successfully completed the DW on Easter Sunday in 26hrs 26mins on a sluggish (hardly flowing) Thames.  Their effort was nothing short of magnificent and inspiring which would have been impossible without the backup of an incredibly resourceful support crew who kept them fed, watered, sheltered, repaired and amused throughout the 125mile epic canoe race. 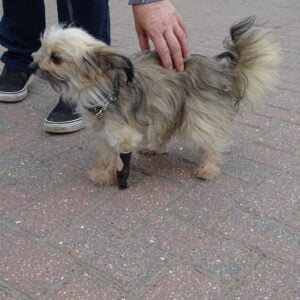 Proactive have been privileged to work with Supervet Professor Noel Fitzpatrick to help little Ren get back on her feet. Ren suffered a devastating injury to her front left paw when another dog attacked her. Her owner, Julie, rushed her straight to her local vet who suggested a full leg amputation but she decided to turn to Professor Noel Fitzpatrick to see whether he could provide Ren with a bionic solution.
Noel examined Ren’s x-rays and discovered that her foot had been ripped off from the paw down. He was perfectly confident that she would live a long and happy life on three legs, and was reluctant to offer amputation prosthesis because she would face a major operation. Instead, he suggested a suction cup prosthesis (a removable foot). Julie was thrilled at the idea of Ren being able to walk again and even more so at the prospect of not having major surgery.
It would take a few weeks for Noel to work with a local prosthetics company to create Ren’s prosthetic foot but in the meantime, he was concerned about infection in her open wound and needed to seal it to create a stump for the prosthetic foot. He decided to cut back the bone up to her wrist and remove the infected area. He then created a stump for the prosthetic foot and and the team at Proactive bandaged her foot up to create a mould for the stump prosthesis. Ren was in great condition and spent the next five days on the ward recovering before Julie took her home.
Two months after the attack, Ren returned to Fitzpatrick Referrals to test out her prosthetic foot. The model consisted of two components – a silicon liner (to buffer the skin and avoid sores) and a carbon fibre sleeve produced with a rubber foot. Christophe Cointet from Proactive and Noel’s colleague Cameron assisted with fitting it – to ensure additional measurements were taken for the final model. The model needed just a few more tweaks before completion – it wasn’t long until Ren would be back up and running again.
Back in Bedfordshire, Ren started living life to the full with her prosthetic foot. Her brothers and sisters hadn’t even noticed any difference and welcomed her back to the pack. Julie had noticed how much more resilient she was and she was running around totally carefree – just as she was before.
Follow this link to view the episode of Supervet featuring Ren https://www.channel4.com/…/the-supervet…/on-demand/65174-018 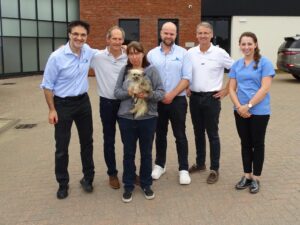