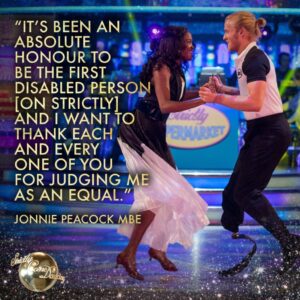 Jonnie told host Tess Daly: “I think it’s been an absolute honour to be the first disabled person [on Strictly] and I want to thank each and every one of you for judging me as an equal.”

Of the judge’s comments he said “That’s what I want. You’ve been critical with me and I want that criticism. I think that’s fantastic and hope it paves the way for more people to come through and I think they may be able to stick their bum under a bit better than me.”

“I need to say an absolutely gigantic thank you to this woman [Oti] for pushing me because she knows what I’m capable of. Her choreography has been has been outstanding, and for putting up with me – thank you so much.”

His professional dancing partner, Oti added: “This has been one of the most life changing things that could ever happen to me. Jonnie is not only an inspiration but he represents so much more. If anybody wants to do anything, if you put your mind to it then you can achieve it and that’s what he represents.”

As part of the ongoing development of our prosthetic services, we are seeking a dedicated, committed prosthetist with a passion for achieving excellent results in predominantly high activity, high achieving individuals.

Excellent technical skills will be essential with a practical understanding of composite and thermoplastic manufacture processes, along with the ability to communicate well within a small, specialist team.

The position will be based at our new, purpose built facilities in a beautiful location in Surrey, close to road, rail and air network transport links.

A competitive salary and benefits package is available for the successful candidate.

For further details and to register your interest in this position please email your CV to richard@proactiveprosthetics.co.uk 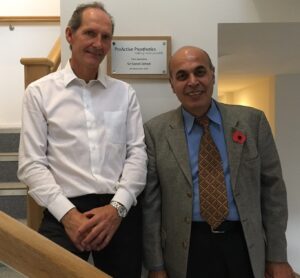 On 4th November 2017 friends and colleagues gathered to mark the official opening of our clinic by Sir Saeed Zahedi. More than 60 friends from the prosthetics and associated industries and professions came to celebrate the occasion with the ProActive team, taking the opportunity to tour the facilities and catch up with each other.

For the formal part of the day Richard started by thanking all for being there and acknowledging that it has been 18 months since ProActive moved to the new clinic. He had, he mused, been waiting for a knight to come along to do the honours! There was plenty of reminiscing over the past years in the industry. In particular he thanked Peter Lewis, who was his manager at Blatchford for many years, for loosening the reins enough to give him opportunities but not enough to hang himself! He also thanked Stephen Blatchford for the support in helping to set up 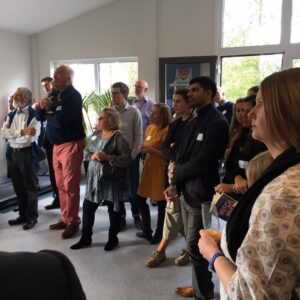 ProActive in the early years and Marcel Bertet for being the constant guide on ‘how it should be’ in prosthetic care. Richard mentioned two absent friends. One a patient, David Wilkie,  who sadly passed away a year ago. A relentless business and family man who never let his amputation slow him down, becoming a friend and snowboarding buddy. The other, his father in-law, John Coleman, who sadly passed away nearly 3 years ago and whose quote in times of trouble was ‘this may be the best thing that ever happened’ and ‘you don’t know how lucky you are!’  He was an architect who would have loved to have been involved in the development of the clinic building. 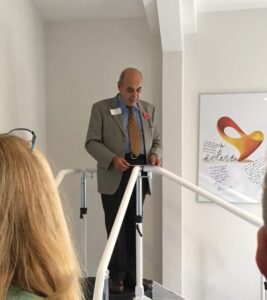 There were ”BAFTA award’ style video clips from Sophie Kamlish who thanked Richard for helping her to break her own world record and become 100m world champion  at the World Para-athletics this summer and from Richard Whitehead MBE, from the finish line of the New York marathon.

Saeed gave a philosophical speech about the ProActive journey to a building aptly called Innovation Place with a business motto of ‘making more possible’ before declaring the clinic officially open. 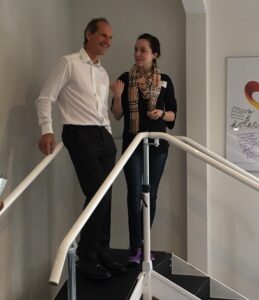 Stef Reid also made a speech about her relationship with Richard and ProActive in helping her to achieve her long jump world championship gold medal.

The formal proceedings were followed by drinks and substantial canapes amongst the buzz of animated conversation.

We would like to thank all those who came to celebrate this special occasion.