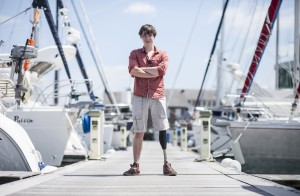 Advanced waterproof bionic leg gets sailing champion back on the water

Laurence Greenough, an 18 year old from Plymouth who lost his leg in a sailing accident, has had his ability to get back on the water restored with the help of the world’s most advanced bionic leg developed by mobility experts Ottobock. The Genium X3, originally designed for military personnel, is the only completely waterproof microprocessor prosthetic knee and has a Bluetooth remote control to switch between sailing, walking, jogging and cycling modes.

Laurence was just 11 years old when he lost his leg in a tragic accident in the sea. Sailing with his family in Plymouth harbour, a routine capsize drill and subsequent incident with a safety boat went terribly wrong, the injuries Laurence sustained resulted in an above the knee amputation of his left leg. Only two months after the accident, Laurence was back on the water, choosing to use crutches to get around as there were no waterproof prosthetic legs on the market; using a normal prosthesis in the sea would cause it to corrode. 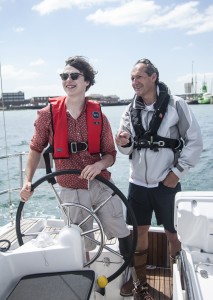 Carrying on with his sailing dream, he was honoured with the prestigious Raymarine Young Sailor of the Year award in 2008, following in the footsteps of past winners including Olympic Gold medallist Ben Ainslie OBE and world class yachtswoman Dame Ellen MacArthur.

As time went on, Laurence stopped sailing as the difficulties of sailing and doing other activities without a prosthetic leg became apparent. After two years on crutches he was referred to and fitted by Richard Nieveen of ProActive Prosthetics with a computer controlled prosthetic ‘C/Leg’ which provided him with improved mobility but could not be worn on deck due to the risk of water damage.

When Ottobock’s Genium X3 was released Lawrence was keen to find out more about the bionic leg which was designed for people who lead an adventurous lifestyle. He has just been fitted at the ProActive Prosthetics clinic in Surrey.

Laurence went out sailing for the very first time on his new waterproof leg on Tuesday 17th June along the south coast from Portsmouth Harbour on a 37 foot cruiser racing yacht with a team from ProActive Prosthetics.

Laurence states: “The first thing I planned to do was to take it sailing! It also has a ‘walk to run’ feature and bespoke running mode; I had not run since 2008 and it was the most exciting thing to be able to do it again. It makes walking feel so natural – I trust it and don’t have to use so much energy. I feel safe and can just relax and let the leg do all the work.”

The Genium X3 is the world’s most technologically advanced prosthetic leg and features activity modes that will allow Laurence to take part in everything his friends do: sailing, grass boarding, running and football in the park. The bionic technology can be programmed from a laptop and can be switched manually between different modes using bluetooth. Sensors, a gyroscope and in-built computer mean the Genium X3 can be programmed to perfectly match Laurence’s lifestyle.

Richard Nieveen, Laurence’s prosthetist at ProActive Prosthetics, explains:  “The set up and fitting of Laurence’s new leg is tailored to get him back doing all of the things he enjoyed before his accident. We’ve also programmed a special sailing mode in the knee to allow him to move around the boat with ease – and of course he’ll be safe in the knowledge that he can get it wet without any problem”