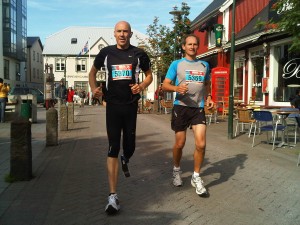 On Saturday 21st August 2010 Richard Nieveen and David Wilkie took part in the Reykjavik 10k run, supported by Ossur. It was the first time David (a below knee amputee) had been to Iceland and the first time he had run this distance since his accident 8 years ago.

With only one practise session on a blade completed prior to travelling to Iceland, the goal was simply to complete the distance, David openly confessed to an audience over over 300 staff at Ossur’s headquarters the day before the event, that he was scared……

On race day David and Richard started towards the end of the field which meant for the entire race they were overtaking other runners; Richard’s strategy being to get David to the finish line without stopping.

David completed the run in 65 minutes (without stopping) which was a huge personal achievement. The trip to Iceland will be remembered by both Richard and David for many reasons, but probably above all were the inspirational atheltes that travelled with them from the UK.

We would like to thank the staff at Ossur for the opportunity to take part in this event and particularly to Richard Hirons for making it a successful and truly memorable trip to Iceland.